SODANKYLÄ, FINLAND – (January 18, 2023) – FireFox Gold Corp. (TSX.V: FFOX)(OTCQB: FFOXF)(“FireFox” or the “Company”) is pleased to report results from the first three drill holes of the fall 2022 core drilling campaign at the Company’s 100%-held Mustajärvi Gold Project in Lapland, Finland. These three holes were part of a six-hole program (977.1 metres) that tested a new near-surface high-grade gold zone at the East Target (see Figure 1). All three of the holes returned high-grade gold assays, including some of the richest intercepts yet reported from the project.

Drillholes 22MJ021 and 22MJ022 both encountered significant high-grade gold at depths of less than 20 metres below surface. The best intercept in this round of results was 15.5m of 13.09 g/t gold in 22MJ021, which began just below the covering glacial sediments at 11m downhole depth. Importantly, these holes were drilled perpendicular to the drilling orientation favoured in the previous campaigns and appear to have successfully confirmed that the observed cross-structures host significant mineralization.

FireFox’s CEO, Carl Löfberg, commented, “Our drilling at Mustajärvi East is yielding consistent improvement in grade and thickness of the gold mineralization. In addition to the continued presence of narrow bonanza veins, our most recent drillholes have encountered replacement style mineralization over greater widths than previously seen on the project. It also happens that these new robust intercepts lie at very shallow depths in the East Target. By drilling these new holes towards the northeast, we have expanded the footprint of the high-grade system to the west, to the north, and to depth. We anticipate results from two more holes in the East Target in a few weeks.”

Highlights of selected intervals are shown below, while Table 1 includes all significant intercepts:

This drilling was prompted by the extraordinary results from drill hole 22MJ006, which returned 13.85m averaging 28.74 g/t gold from only 24 metres downhole (see Company news release dated September 6, 2022).  Drill holes 22MJ021 and 22MJ022 were drilled perpendicular to 22MJ006 to test for lateral and downdip extension of the 22MJ006 mineralization. The third drill hole in this phase of work, 22MJ023, tested the expansion of the mineralized trend farther to the north. All three drill holes returned multiple significant intercepts including high-grade gold mineralization that are expected to expand the East Target laterally and at depth. 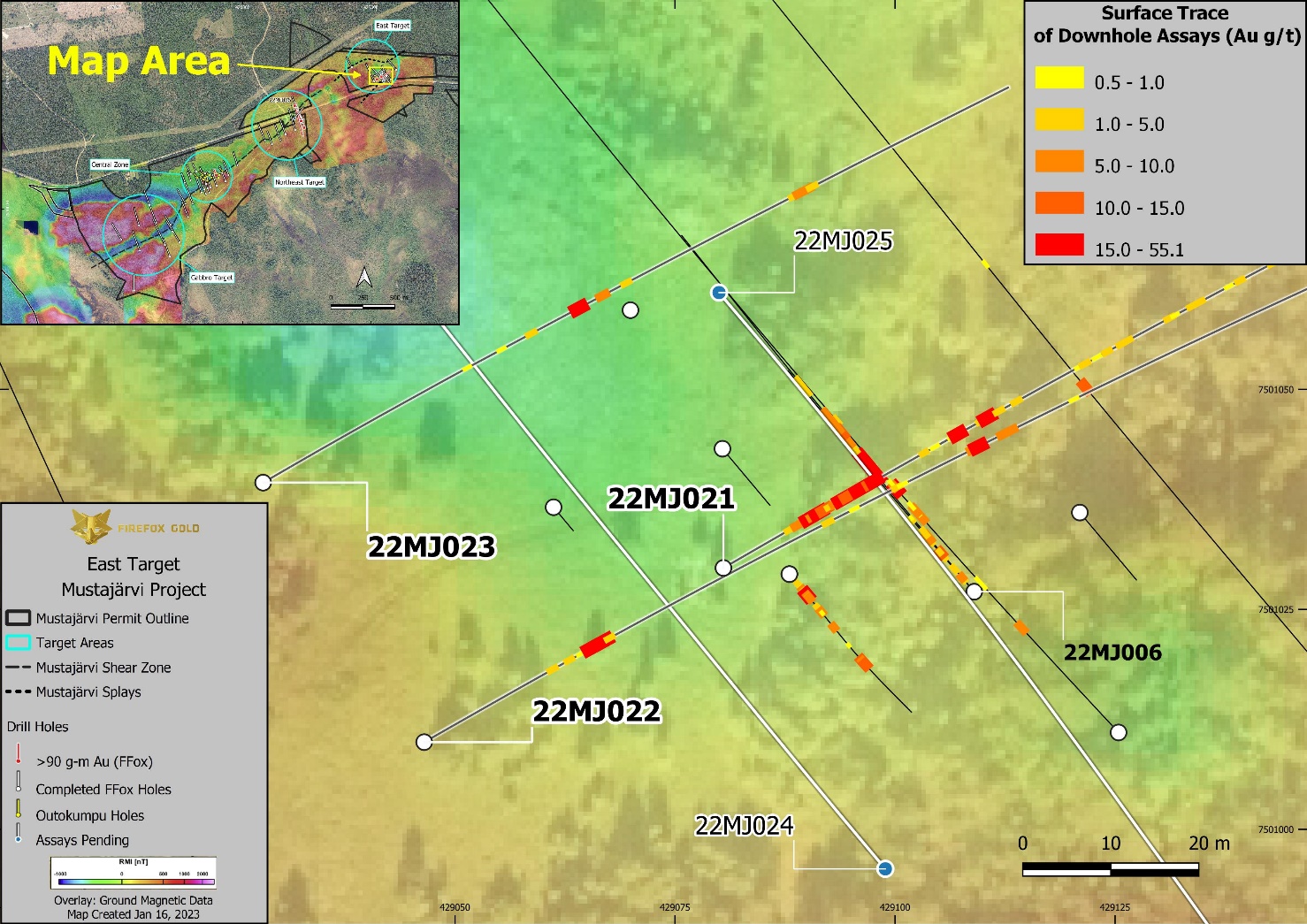 The Mustajärvi Project lies along the highway between the cities of Kittilä and Sodankylä, approximately 17 kilometres east of Kittilä. The property straddles the Mustajärvi Shear Zone (MSZ), a major right-lateral shear zone that has associated second and third-order structures which further dissect the project into separate structural zones. The Sodankylä Group rocks, which are primarily to the north of the shear zone in the footwall, include metamorphosed sedimentary and volcaniclastic rocks. Geophysics and drilling have identified an extensive corridor of albite – sericite alteration in the footwall along more than two kilometres of the structure. The project remains at an early stage as FireFox and predecessor companies have drilled approximately 12,594 metres to date.

FireFox’s structural model identified repetitive dilatant zones along the MSZ where vein swarms and higher-grade gold are concentrated. Three main areas of gold mineralization have been identified along a 2.1-kilometre segment of the MSZ, namely the Central Zone, the Northeast Target, and the East Target.

During the year 2022, FireFox completed a total of 25 diamond drill holes for 3,904 metres at Mustajärvi, testing the Northeast Target, the East Target, the Gabbro Target and the Central Zone. The final program of the year included six holes totalling 977 metres, three of those holes are reported herein.

The East Target mineralization exhibits extensive albite – sericite alteration, as is typical along the MSZ, but iron oxide and iron carbonate veining are more common in this eastern part of Mustajärvi. The drill logs from the recent drilling also include increased reports of mafic volcanics interbedded with the metasediments and tuffaceous rocks that host most of the Mustajärvi mineralization. Gold continues to be closely correlated with the occurrence of pyrite. Similar to previously reported holes from the East Target, the near-surface gold mineralization from the most recent holes is associated with fractures and impregnation of (partially oxidized) pyrite along fractures, forming blebs, nests, disseminated, semi-massive and massive pyrite mineralization within the host rock. The thicker intervals reported in 22MJ021 and 22MJ022 present strong evidence of hydrothermal replacement of the host rock with quartz-sericite-pyrite + iron oxide. Pyrite can be seen to be replacing laminations and other sedimentary textures (See Figures 2 and 3). 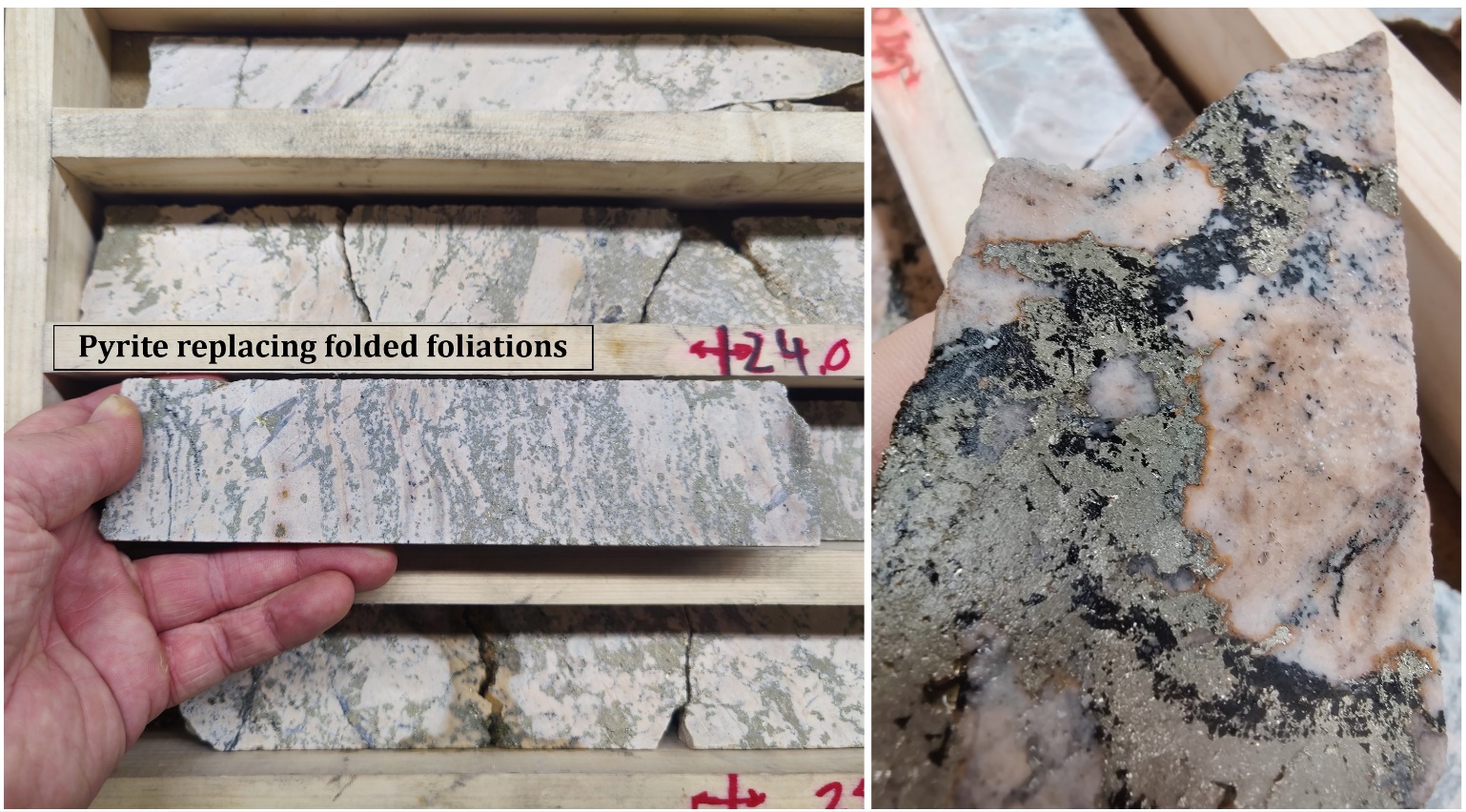 The deeper mineralized intervals include the more typical quartz-carbonate-tourmaline-pyrite (QCTP) veins that are commonly seen at Mustajärvi. The vein and replacement types of mineralization may be separate events, but the geochemistry is very similar – dominated by an association with bismuth, tellurium, molybdenum, cobalt, and nickel and low in arsenic and copper. There are at least two major directions of controlling structure on the Mustajärvi mineralization, east-northeast striking (parallel to the MSZ) and north-northwest striking (perpendicular to the MSZ). There are still results pending for two holes drilled along the northwest-southeast profile at the East Target, and FireFox geologists continue to study the relationship between the narrow high-grade veins and thicker replacement style of mineralization.

The 28 mineralized intervals (>1 g/t gold) confirmed by the assays included both vein and replacement styles of mineralization, starting immediately below glacial till overburden at a depth of 11.0m and continuing to a depth of 94.65m (Table 1). The best interval reported above (15.5m averaging 13.09 g/t Au*) appears to be contiguous with the high-grade gold reported previously in 22MJ006 and extends that mineralization approximately 15m to the west-southwest. The results from the upper portion of this drillhole (11.0 to 27.5m) have been reported from a 1,000-gram screen fire assay protocol.

Hole 22MJ022 was drilled on the same profile as hole 22MJ021, approximately 40 metres to the southwest, and nearly 65 metres west of 22MJ006. Its east-plunging configuration was designed to undercut the shallow high-grade zone. It was collared in thin glacial sediments overlying intensely altered intermediate tuffites and lesser mafic sequences, and it intersected eleven intervals containing >1.0 g/t Au, starting at 20.1m downhole. The best interval started at 24.6m depth and returned 5.4m averaging 21.66 g/t Au, including 3.0 m at 37.39 g/t Au.

More importantly, hole 22MJ022 also intersected deeper high-grade gold mineralization at 86m, such deeper veins have not been commonly encountered to date at the East Target. This interval returned 1.7m averaging 31.6 g/t Au, including 0.7m at 55.06 g/t Au. The deepest interval from this hole was at a depth of 90.7m and included 2.0m averaging 6.13 g/t Au.

The table below summarizes the location information for the fall 2022 drill campaign at Mustajärvi.

FireFox team members transported the samples to an ALS sample prep lab in Sodankylä. The samples were sawed then crushed to -2 mm, split and pulverized into 1kg pulps, before being shipped to the ALS facility in Rosia Montana, Romania for gold by fire assay of 50 gm aliquots with AAS finish (method Au-AA24). Selected samples were assayed with a 1,000-gram Au-SCR24 method (screen fire assays).  Other elements, altogether 48, were measured after four-acid digestion by ICP-AES and ICP-MS (method ME-MS61) at the ALS facility located in Loughrea, Ireland.

Patrick Highsmith, Certified Professional Geologist (AIPG CPG # 11702) and director of the Company, is a qualified person as defined by National Instrument 43-101. Mr. Highsmith has helped prepare, reviewed, and approved the technical information in this news release.

Dr. Sven Hönig, Certified European Geologist (EFG EurGeol Title # 1789) and General Manager - Exploration of the Company, is a qualified person as defined by National Instrument 43-101. Dr. Hönig has supervised the field work reported herein and has helped to prepare and approves the technical information in this news release.

On behalf of the Board of Directors,
“Carl Löfberg”
Chief Executive Officer

FireFox Gold Corp.
Email:  This email address is being protected from spambots. You need JavaScript enabled to view it.
Telephone: +1-778-244-8439

Forward-looking statements in this release may include statements regarding: the intent to conduct additional drilling; the belief as to the location of the most prospective gold targets; the location of targets for future drill programs; and the current and future work program, including the extent and nature of exploration to be conducted in 2023. Although we believe the expectations reflected in our forward-looking statements are reasonable, results may vary.

NOT FOR DISTRIBUTION TO U.S. NEWSWIRE SERVICES OR FOR RELEASE, PUBLICATION, DISTRIBUTION OR DISSEMINATION DIRECTLY, OR INDIRECTLY, IN WHOLE OR IN PART, IN OR INTO THE UNITED STATES.