SODANKYLÄ, FINLAND – (May 27, 2022) – FireFox Gold Corp. (TSX.V: FFOX) (OTCQB: FFOXF)(“FireFox” or the “Company”) is pleased to provide an update on exploration at its 100%-controlled Sarvi and Mustajärvi gold projects in Lapland, Finland. FireFox has drilled approximately 8,319m of diamond core to date in the 2021-2022 drill program on the Jeesiö, Mustajärvi, and Sarvi Projects, including the first 12 holes at Sarvi. This release includes a summary of drill results from the first five widely spaced holes across the northern section of the Sarvi target area (See Figure 1).

This program also includes new drilling at the Mustajärvi Project, where possible extensions to the high-grade shear-zone-hosted gold mineralization have been tested at the East Target and Gabbro Target. The new drilling includes 10 holes, five holes at the East Target and five holes at the Gabbro Target. Results are pending for all of these recent holes.

The first hole at Sarvi, 22SA001, intersected low grade but significant gold mineralization across several intervals in an apparent downdip extension of the anomalous gold encountered in FireFox’s first trenches in the area (see Company news release dated January 20, 2022). The rocks in this area are tholeiitic basalt, graphite tuff, and iron formation, which are interpreted to straddle the contact with the Porkonen Formation. This is the formation that hosts much of the Kiistala Shear Zone and Kittilä Mine to the west and northwest from Sarvi.

The gold zones in this hole were often accompanied by highly elevated silver and base metals, as summarized below:

“The team has drilled at four separate target areas during this campaign, and it is appropriate to finish up at Sarvi and Mustajärvi. The initial results at Sarvi are encouraging as we encountered significant low-grade gold and silver mineralization associated with graphite-bearing tuffites and iron formation, a favorable setting for gold mineralization in Lapland. Our first-ever drill hole at Sarvi confirmed the anomalous gold encountered in our trenches, and we have many other targets to test based on the base-of-till and magnetic anomalies to the southeast from these first drill holes. It is also important that we have drilled significant new step outs in the East Target and Gabbro at Mustajärvi. We look forward to receipt of the remainder of our assays from drilling at both projects during the summer,” commented Carl Löfberg, President and CEO of FireFox. 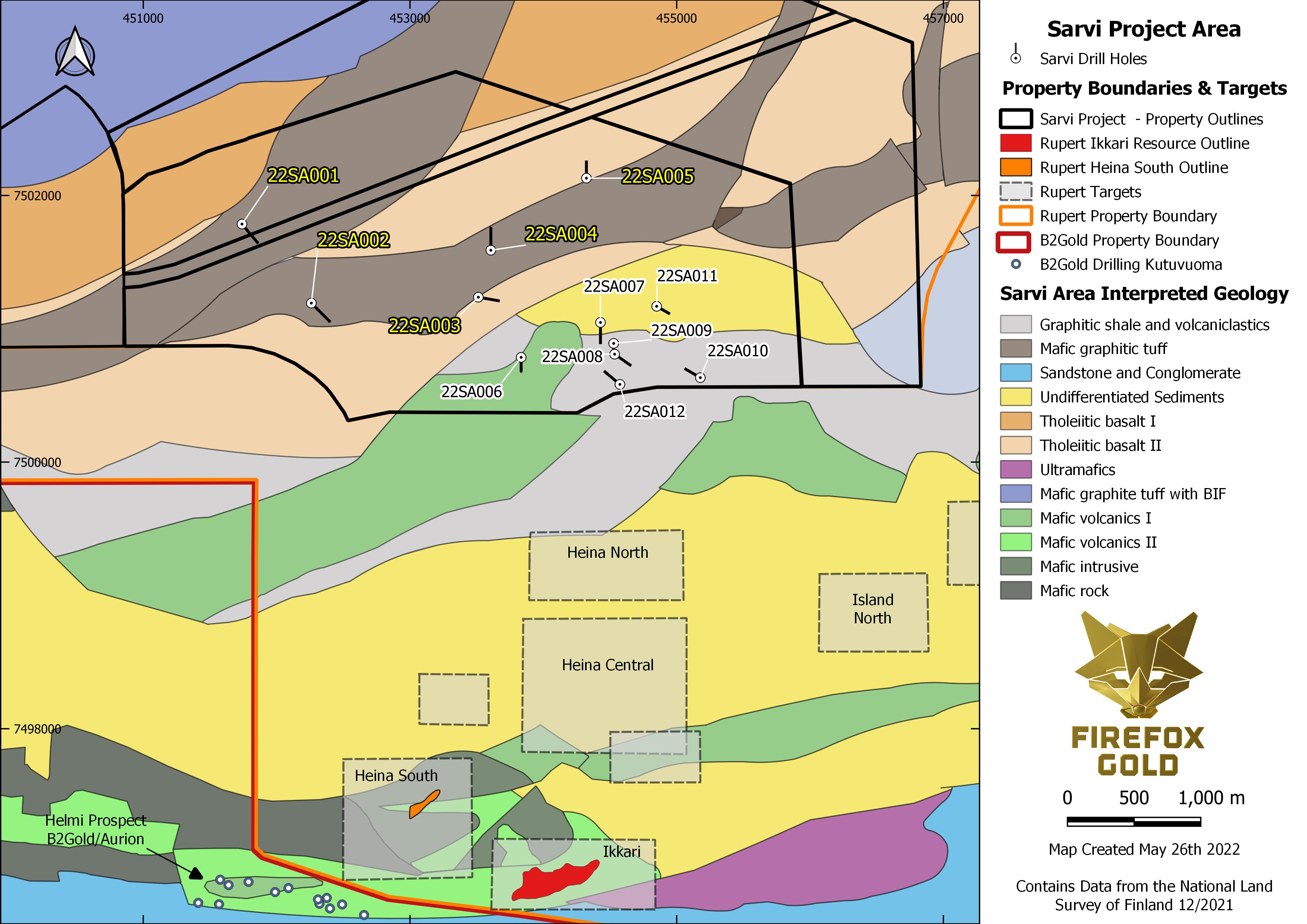 The first drill campaign at Sarvi included 12 widely spaced drill holes totaling 2327.8 metres. The FireFox team targeted these holes based on both geochemical anomalies from base-of-till (BOT) sampling and prospective structural features interpreted from detailed geophysical data. Results for the 5 holes in the northwest portion of the original Sarvi permit are presented here.

Portions of the tholeiitic basalt, mafic (graphite) tuff, and banded iron formation that are interpreted to underlie the northwestern portion of the Sarvi Project are believed to be part of the Porkonen Formation. The Kiistila Shear Zone, which hosts Agnico Eagle’s Kittilä Mine, cuts through the Porkonen Formation to the northwest from the Sarvi Project. FireFox geologists noted anomalous Au, Ag, As, Sb, Bi, Cu, Mo, Zn, and other elements in the BOT sampling in this part of the Sarvi Project. Prospecting also revealed localized areas of outcrop exhibiting silicification, partially oxidized sulfide minerals (gossan), and highly anomalous As and base metals. Follow-up trenching in 2021 confirmed the presence of elevated gold and associated elements, highlighted by 18.0m averaging 0.23 g/t Au. Drill hole 22SA001 confirms the continuation of this low-grade gold zone to depth.

The first drill hole passed through graphite-bearing tuff and schists in the upper portion of the hole with occasional semi-massive to massive pyrrhotite (lesser pyrite) that appear to be exhalative in nature. The exhalate horizons are sometimes cut by iron-carbonate veins and stockworks. The best gold zone is 17.0m at 0.134 g/t, but much of the upper portion of the hole is anomalous in Au, and gold enrichment is always associated with elevated Ag, As, Sb, Bi, Cu, Mo, Te, and Zn. At greater depths in the hole, sphalerite (zinc sulfide) is associated with the iron-carbonate veining. Copper and zinc are also broadly elevated in the hole, but isolated maximum values in the hole are 0.2% for Cu and 0.54% for Zn.

Below the anomalous sulfide-rich zones in the tuff and schists the drill hole passed into more massive mafic volcanics without abundant sulfides. Given the wide spaced drilling and limited sampling in the area so far, this target remains open in all directions for follow-up exploration.

Drill holes 22SA002, 003, and 004 were aimed at various anomalies from till and heavy mineral sampling. These holes penetrated similar volcanic geology, but with more massive volcanic units and much less evidence of exhalite or sulfide mineralization. Each of the holes exhibited anomalous geochemistry in pathfinder elements but without corresponding significant enrichment in gold or silver.

Drill hole 22SA005 was located farther to the northeast to test anomalous BOT geochemistry and an interpreted structure. The hole encountered deeper water black shales and graphitic mudstones, but the hole collapsed in a fault zone and was terminated at 172m depth. The final sample in the hole assayed 31.2 g/t silver, but without corresponding enrichment in gold.

The remaining drill holes at Sarvi were drilled in a different geological setting on the southeastern third of the permit area.  The geology in that area is interpreted to be dominated by mafic volcanics, volcaniclastics, graphite schists, and sedimentary rocks. Most of the drilling in that area was targeted on geochemical BOT anomalies associated with magnetic lows and interpreted faults, some of which are projected from areas to the south being explored by Rupert Resources and B2 Gold. The results for holes 22SA006 to 22SA012 are not yet complete and will be reported separately.

Following the completion of the drilling at Sarvi, FireFox moved the drill rig back to the Mustajärvi Project. On April 5, 2022, FireFox reported results from two holes in the high-grade zone at the Northeast Target and one shallow hole in the East Target. The team has completed 10 additional holes at Mustajärvi so far with several more holes pending. The new drilling includes five holes into the East Target and five holes into the Gabbro Zone on the western end of the property (see Figure 2).

The focus of this drill campaign has been on new targets with significant potential to extend the thickness and strike length of known gold mineralization at Mustajärvi. The East Target has already yielded several significant intercepts of near-surface gold, such as 4.0m averaging 6.35 g/t of Au from 13.6m down hole, including 0.8m at 25.93 g/t Au (see Company news releases dated January 25 and April 5, 2022).

The program is on-going and expected to be completed by the end of the month. 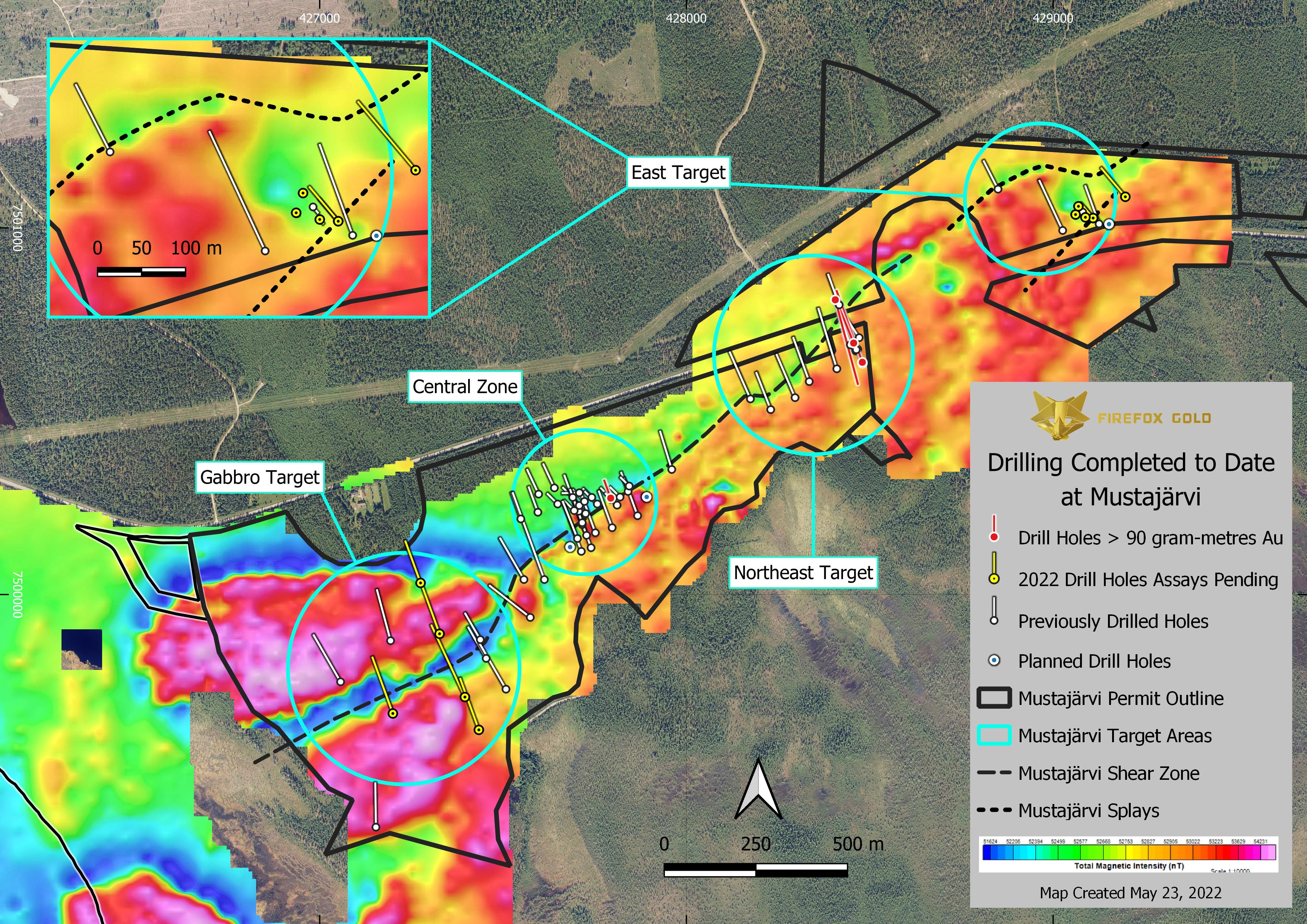 FireFox team members transported the samples to an ALS sample prep lab in Sodankylä. The samples were sawed then crushed to -2 mm, split and pulverized into 1kg pulps, before being shipped to the ALS facility in Rosia Montana, Romania for gold by fire assay of 50 gm aliquots with AAS finish (method Au-AA24). Other elements, altogether 48, were measured after four-acid digestion by ICP-AES and ICP-MS (method ME-MS61) at the ALS facility located in Loughrea, Ireland.