SODANKYLÄ, FINLAND – (May 12, 2022) – FireFox Gold Corp. (TSX.V: FFOX)(OTCQB: FFOXF)(“FireFox” or the “Company”) reports that it has completed a detailed airborne geophysical survey focused on its vast Kolho Property in Lapland, Finland. This is the third phase of airborne surveying completed over the Company’s Northern Group of properties in the last two years and extends the contiguous coverage of the Company’s detailed magnetics data in the region to more than 250km2 (see Figure 1 below). FireFox is also pleased to announce that it is lodging several applications for exploration permits covering most of the Kolho reservation.

Carl Löfberg, President and CEO of FireFox commented “Our field mapping at the Kolho property had suggested that it was a structurally complex area with geological analogies to the settings of the region’s multi-million-ounce gold deposits.  This magnetics survey has confirmed structural similarities to both the Kittilä Mine and the Ikkari deposit, and identified new, previously unmapped structures, all of which provide exciting exploration targets for follow-up work.”

Highlights of the magnetics data from the Kolho area include:

Based in part on these new geophysics, combined with data from reconnaissance geological traverses, mapping, and sampling, FireFox is making application for five separate exploration permits, which will substantially cover the Kolho exploration reservation and allow for detailed mechanized work including drilling. The FireFox technical team continues to evaluate the magnetics data to focus follow-up work planned for 2022-23. Two priority targets have been identified based on similarities in apparent structure and magnetics to the Ikkari discovery (see Figure 2 below). Additional targets will be generated in advance of the next phase of exploration, which is likely to include base-of-till (BoT) sampling that is expected to commence in the most prospective parts of the Kolho Property late this year.

The recently completed airborne magnetics survey covered more than 100km2 focused mainly on the Kolho Property in the eastern portion of the Northern Group. Including previous surveys completed in 2020 and 2021, the Company now has over 250km2 of contiguous magnetics survey data for the area.  The recent work was conducted by the Finnish company Radai, who have extensive experience in providing geophysical surveying using unmanned aerial vehicles (UAV). Further structural interpretations for the geophysical survey data were conducted by the technical team from GoldSpot Discoveries Corp. (TSX.V: SPOT).

The Kolho Property is comprised of a vast area along a major geologic break – the eastern contact between the Kittilä suite and Savukoski group rocks. This contact is a major thrust verging to the east, towards the Sodankylä group quartzites and the Archean Pomokaira complex (granodiorites and tonalite gneisses). This contact zone forms a 23-kilometer-long thrust zone, which the Kolho Property straddles.

The Kittilä suite rocks are bordered by the Sodankylä and Savukoski group rocks in the east, and elsewhere by various types of granitoids. The Kittilä suite comprises volcano-sedimentary remnants of an oceanic island arc and an ophiolitic rim obducted onto passive margin terranes later intruded by post collisional granites. The Kolho Property is structurally complex and hosts a lithologic package analogous to that seen at Rupert Resources’ Area 1, which is a high-priority exploration model for all Lapland explorers. 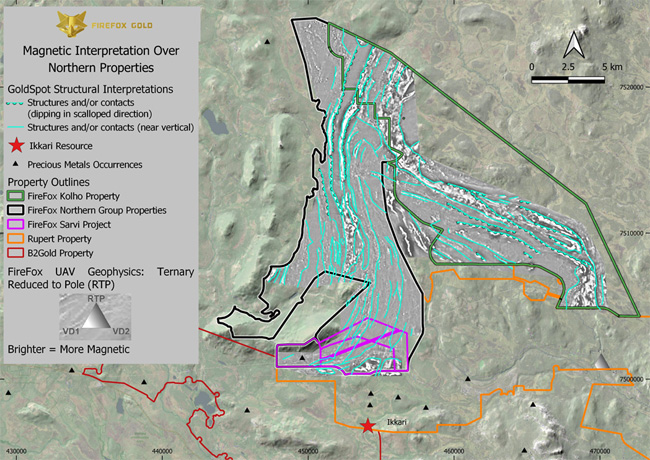 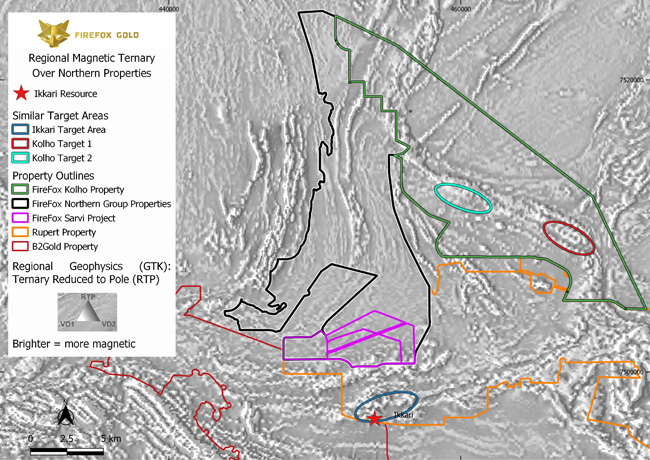