SODANKYLÄ, FINLAND – (April 5, 2022) – FireFox Gold Corp. (TSX.V: FFOX)(OTCQB: FFOXF)(“FireFox” or the “Company”) is pleased to provide an update on winter drilling at its wholly-owned Mustajärvi and Jeesiö Projects. This report includes a summary of results from three more diamond core holes at Mustajärvi and seven core holes at the Utsamo and Saittavaara targets at Jeesiö. In total, these news holes constitute 2,157 metres (m) of drilling.

The results from the Phase 5 drill program at Mustajärvi included holes totaling 2,337m. The results from four earlier holes were announced in a Company news release dated January 25, 2022. The objectives of this program were to better define the controls on the bonanza grade mineralization in the Northeast Target and to test magnetic and structural features at the East Target to determine if a robust mineral system extends into that area (see Figure 1, below).

The three holes reported today include new gold intercepts around the high-grade zone in the Northeast Target and a very shallow new gold intercept in the East Target. At the East Target, a new hybrid drill rig intercepted gold associated with disseminated and vein pyrite in altered tuffites coming quite close to surface (22MJ003). Two new holes offsetting the high-grade zone in the Northeast Target (22MJ001 and 22MJ002) also encountered significant gold mineralization, confirming the northeast strike and southeast dip of the en echelon vein system.

Highlights of Phase 5 2022 Drilling at Mustajärvi

The early-stage drilling at the Jeesiö Project did not return significant gold intercepts, but the structural zone at the Utsamo Target continues to return encouraging evidence of faulting, alteration, and anomalous geochemistry.

“Drilling along the strike of the inferred mineralization on both the East Target and Northeast targets at Mustajärvi has not only confirmed the continuation of gold mineralization within the controlling structures but also aided in defining their orientation,” commented Carl Löfberg, President and CEO of FireFox. “This information will help us target additional potential high-grade gold mineralization in future drill programs. We are very excited to see the results later in the spring when we focus the drill rig on the wide open, shallow mineralization at the East Target and on the new targets in the gabbro to the southwest of the permit.”

The drilling program has moved on to FireFox’s Sarvi Project. However, further drilling is planned at Mustajärvi later this spring. New drilling will focus on the East Target and new targets in the southwest part of the permit. The East Target has now yielded multiple intercepts of strong gold mineralization that are open in all directions.

The Mustajärvi Project lies along the highway between the cities of Kittilä and Sodankylä, approximately 17 kilometres (km) east of Kittilä. The property straddles the Mustajärvi Shear Zone (MSZ), a major right-lateral shear zone that has associated second and third-order structures that further dissect the project into separate structural zones. The Sodankylä Group rocks, which are primarily to the north of the shear zone in the footwall, include metamorphosed sedimentary and volcaniclastic rocks. Geophysics and drilling have identified an extensive corridor of albite – sericite alteration in the footwall along more than 2km of the structure. The project remains at an early stage as FireFox and predecessor companies have only drilled approximately 9,357 metres to date.

FireFox’s structural model identified repetitive dilatant zones along the MSZ where vein swarms and higher-grade gold are concentrated. Three main areas of gold mineralization have been identified along a 2.1-km segment of the MSZ, namely the Central Zone, the Northeast Target, and the East Target. The Central Zone and Northeast Target both host bonanza grade gold associated with clusters of veins in the footwall of the shear zone and are separated by more than 700m. The Northeast Target hosts the best drill intercepts to date including drill holes 21MJ001 and 21MJ010, which both returned high-grade intervals equivalent to approximately 150 gram-metres of gold (expressed as gold grade * thickness of mineralization) (see Company news releases dated June 17 and September 9, 2021). The East Target was first identified in the phase 4 drill program when two holes were drilled based on the new structural model, and both intersected modest shallow gold-mineralized intervals (see Company news release dated August 17, 2021). The East Target represents the third zone of dilation along the MSZ predicted by structural model.

Within the East Target area, hole 22MJ003 was collared about 750m northeast of the high-grade zone and 55 m to the northwest of the previously released drill hole 21MJ015 (refer to Company news release dated January 25th, 2022).  This hole was a test of a new light hybrid drill rig designed for BOT sampling but having the capability to drill cost-effective diamond core to approximately 25m depth.

This test was a success, resulting in a core hole completed to a depth of 19.8m that intercepted lithology and mineralization similar to that found in 21MJ015. Gold was hosted in strongly altered and kaolinized intermediate tuffite metavolcanics with vein and disseminated pyrite mineralization. The best interval in the hole was 6.35 g/t Au over 4.4m (including 0.8m at 25.93 g/t Au) from 13.6 metres down hole. This shallow intercept is considered significant as all four holes in the East Target have intercepted gold mineralization, which remains open in all directions (see Figure 1). 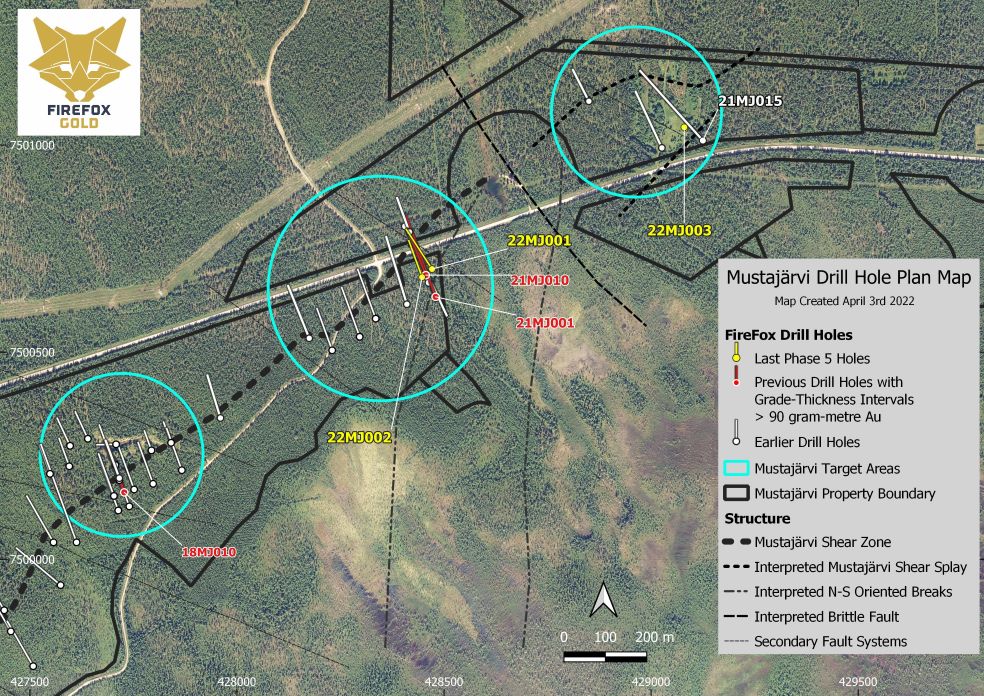 Both of these drill holes encountered the extensive alteration system cut by multiple quartz-carbonate-tourmaline-pyrite (QCTP) veins with significant gold grades (see Figure 2). Based on apparent strike, dip, depth, and vein mineralogy, the team is confident that these intercepts confirm continuity of the high-grade zone, even though grade and thickness vary, as previously reported. The strongest gold intercepts come from 22MJ001, including: 1.9m averaging 8.96 g/t Au starting 149.8m downhole, which includes 1.0m at 14.50 g/t Au; 1.0m at 8.09 g/t Au from 164.3m downhole; 1.25m at 8.32 g/t Au from 180.0m downhole, including 0.6m at 15.92 g/t Au; and 1.35m at 5.76 g/t Au from 203.0m depth. This hole extends the mineralized zone by approximately 12m to the east-northeast from high-grade intercepts in 21MJ010.

Interpretation of the results suggests that the Northeast Target gold-controlling structure trends sub-parallel with the main shear zone and lithological contact in a southwest-northeast direction and dips toward the east-southeast dip. The axis of the high-grade portion of this system is believed to represent an en-echelon structure that plunges approximately 35°-40° the northeast. 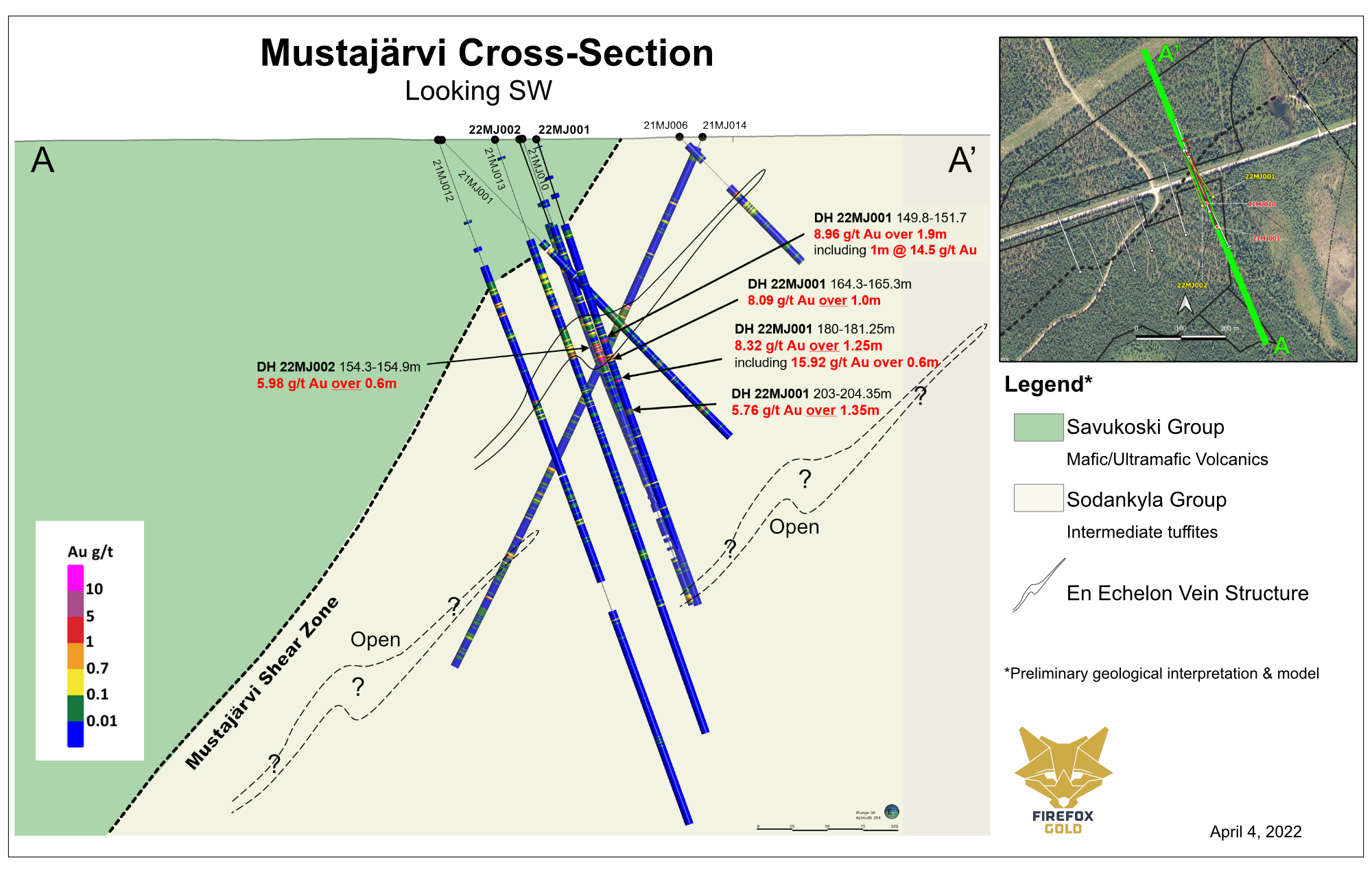 FireFox has also received results for the reconnaissance drilling campaign that commenced late in 2021 at the Company’s 100% held Jeesiö Project (see Company News Release dated November 11th, 2021).  A total of seven holes were drilled, including five at the Utsamo target totaling 1,113m and two at the Saittavaara target totaling 400m (see Table 1).

Previous drilling at the Utsamo target intersected significant fault zones, which are believed to be part of the Sirkka Shear Zone. The recent Utsamo drilling program was aimed at multi-element anomalies from BOT sampling completed across the structural zone and additional interpreted structures from the geophysical data (see Figure 3). The BOT anomalies included multiple pathfinder elements for orogenic gold, such as gold, tellurium, bismuth, arsenic, and antimony (see Company news release dated October 26th, 2021). Drill holes 21JEE004 and 21JEE005 targeted one of the strongest BOT geochemical anomalies in the northwestern part of the Utsamo target area. Both drill holes intersected thin intervals of albitized metasediments with disseminated and vein-related pyrite, but no significant gold. Drill hole 21JEE006 targeted the same interpreted structure, farther to the northwest from 21JEE004 and 21JEE005. This drill hole intersected a significant fault zone, and the drilling was terminated due to technical issues at 208.8m downhole.

Drill hole 21JEE007 was collared in the central part of the Utsamo target testing another geochemical anomaly, approximately 1.08km southeast from 21JEE004. This drill hole intersected a package of strongly faulted and altered metasediments with varying mafic volcanic and intrusive rocks but no significant gold. Drill hole 21JEE008 was targeted on another interpreted structural feature that apparently cuts an interpreted gabbroic intrusive in the southeast of the target area. The drilling did not confirm the presence of a structure.

Drill holes 21JEE009 and 21JEE010 were drilled at the Saittavaara Prospect, approximately 10km south of Utsamo, where a near-surface zone of 4.0m averaging 2.03 g/t Au, including 2.0m at 3.18 g/t Au was reported from scout drilling in 2021 (see Company news releases dated August 3rd, 2021). Despite favorable indications from the geophysics, the drilling did not encounter the same strong deformation or alteration previously seen in the area. 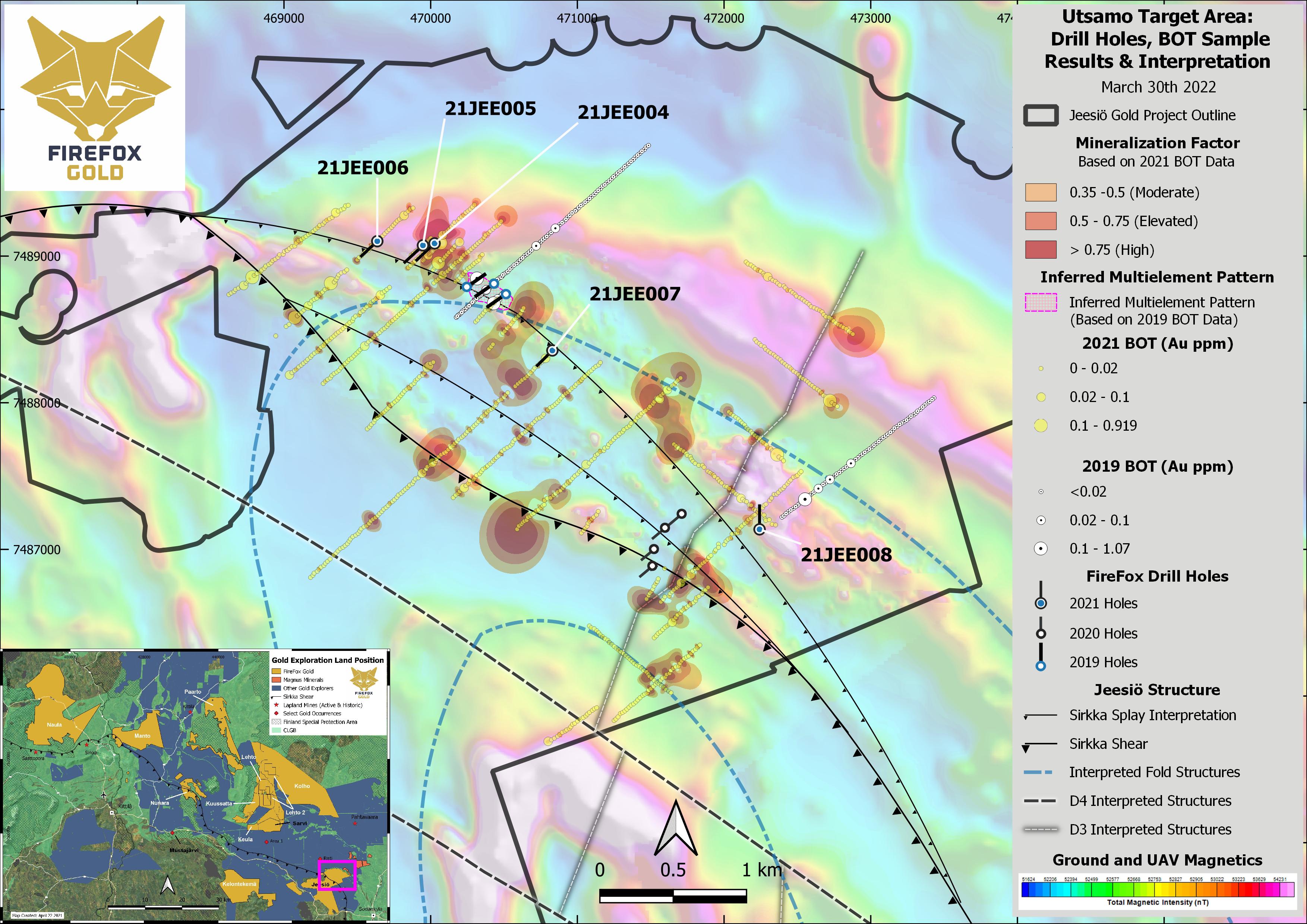 The core was transported from the rig to the Company´s core storage facility in Sodankylä, where FireFox’s exploration team conducted the geological and geotechnical logging and selected the assay intervals. Assay intervals were generally 1 metre but in some circumstances were modified according to lithological boundaries and other factors. FireFox geologists maintained chain of custody and applied sampling procedures according to best industry practice and with due attention to quality assurance and quality control, including sampling field duplicates and insertion of certified standard and blank samples.

FireFox team members transported the samples to an ALS sample prep lab in Sodankylä. The samples were first crushed to -2 mm, split and pulverized into 1kg pulps, before being shipped to the ALS facility in Rosia Montana, Romania for gold by fire assay of 50 gm aliquots with AAS finish (method Au-AA24). Gold values which exceeded 10 ppm were assayed in triplicate by fire assay with a gravimetric finish (method Au-GRA22, Au-GRA22d and Au-GRA22t). Selected samples were assayed with a 1,000-gram Au-SCR24 method (screen fire assays) based on the presence of visible gold. Other elements, altogether 48, were measured after four-acid digestion by ICP-AES and ICP-MS (method ME-MS61) at the ALS facility located in Loughrea, Ireland.