SODANKYLÄ, FINLAND – (August 24th, 2021) – FireFox Gold Corp. (TSX.V: FFOX)(OTCQB: FFOXF)(“FireFox” or the “Company”) announces the commencement of systematic mechanized exploration on its 100%-controlled Sarvi Project, which adjoins Rupert Resources’ Area 1 discovery zone. FireFox geologists began ground geophysics during the winter of 2021, followed immediately by mapping and sampling earlier this summer, and they have now escalated work to include: bottom-of-till (BOT) sampling and excavator trenching at high-priority targets on the newly granted exploration permit.

The expansion of work at Sarvi comes immediately on the heels of two permit issuances by the Finnish Safety and Chemicals Agency (Tukes). This level of permit allows mechanized exploration, including drilling. The applications for exploration permits at the Sarvi and Lehto properties were made in November 2019 after preliminary interpretations of regional data and reconnaissance traverses yielded several attractive targets warranting follow-up. The Sarvi permit encompasses 944 hectares and is accessed via all-season secondary roads from the Sodankylä – Kittilä highway. The Lehto permit covers approximately 494 hectares and is also accessible by road. There remain several FireFox permit applications surrounding Sarvi, and new reservations farther north tie the area together into a very large holding (See Figure 1 below).

Carl Löfberg, FireFox’s President and CEO, commented on the significance of the Sarvi Project, “The granting of the exploration permit at Sarvi marks our fourth drill-ready project, and the team is already hard at work confirming and expanding upon several prospects. Sarvi hosts an attractive interaction of multiple episodes of structure with favorable host rocks. We are very excited to deploy our teams with drills and excavators to investigate the several gold and arsenic anomalies we have been developing. We expect to finalize initial targets and commence core drilling at Sarvi by November.”

Summary of Sarvi and Lehto Properties

The Sarvi and Lehto properties are key parts of the Company’s large Northern Group land package in the eastern succession of the Kittilä Suite mafic volcanic rocks. Both properties are subject to the Seuru Option agreement with Magnus Minerals (See Company news release dated August 30, 2018), and FireFox expects to vest in 100% equity under the agreement early in 2022.

In August 2020, FireFox completed a detailed unmanned airborne vehicle (UAV) magnetic survey over the Sarvi Project. Integrating these data with other regional surveys and data from the Geological Survey of Finland (GTK), FireFox interpreted several possible NW-SE trending structures intersecting E-W and NE-SE structures that are believed to be older. The youngest major event in this area may be the prolific D3 structures that appear to control much of the gold in the Central Lapland Gold Belt (CLGB), but additional work is required to confirm this. Several gold and arsenic anomalies at Sarvi are related to the northwest trending faults. Similar structural trends have been reported by Rupert Resources across Area 1 and in particular at the Ikkari Discovery, which lies only 5km south of the tenement boundary.

FireFox cautions that proximity to a discovery or mineral resource, does not ensure that mineralization will occur on FireFox’s property, and if mineralization does occur, that it will occur in sufficient quantity or grade that would result in an economic extraction scenario.

While FireFox’s structural model is evolving, the intersection of D3 or D4 with earlier brittle faulting has led to numerous discoveries in the CLGB. Till sampling and prospecting at Sarvi have already identified gold and arsenic anomalies, most of which are associated with interpreted major faults. Highlights so far include rock chip samples of 1.47 g/t gold and 1.86% copper, and highly anomalous counts of gold micro-nuggets (accompanied by arsenic) in heavy mineral samples and till (See Figure 2 below).

This part of the CLGB is nearly unique in the FireFox portfolio as having an association of very high arsenic with gold in mafic volcanic rocks, without the high bismuth and tellurium that occurs at Mustajärvi and other prospects. This is the geochemical signature of the orogenic gold deposits at the Kittilä Mine, and the presence of graphite-bearing tuff in both areas is also noteworthy. The abundant mafic lithologies that are mapped at Sarvi, including tholeiitic basalt, are encouraging because these rocks can be excellent hosts of gold mineralization due to how they accommodate deformation and react with mineralizing fluids.

FireFox’s fall and winter drill program is to commence in early October. The current plan is to test new targets at Sarvi with a modest sized program starting in November and a second follow-up program in Q1 2022.
Patrick Highsmith, Certified Professional Geologist (AIPG CPG # 11702) and director of the Company, is a qualified person as defined by National Instrument 43-101. Mr. Highsmith has helped prepare, reviewed, and approves, the technical information in this news release. 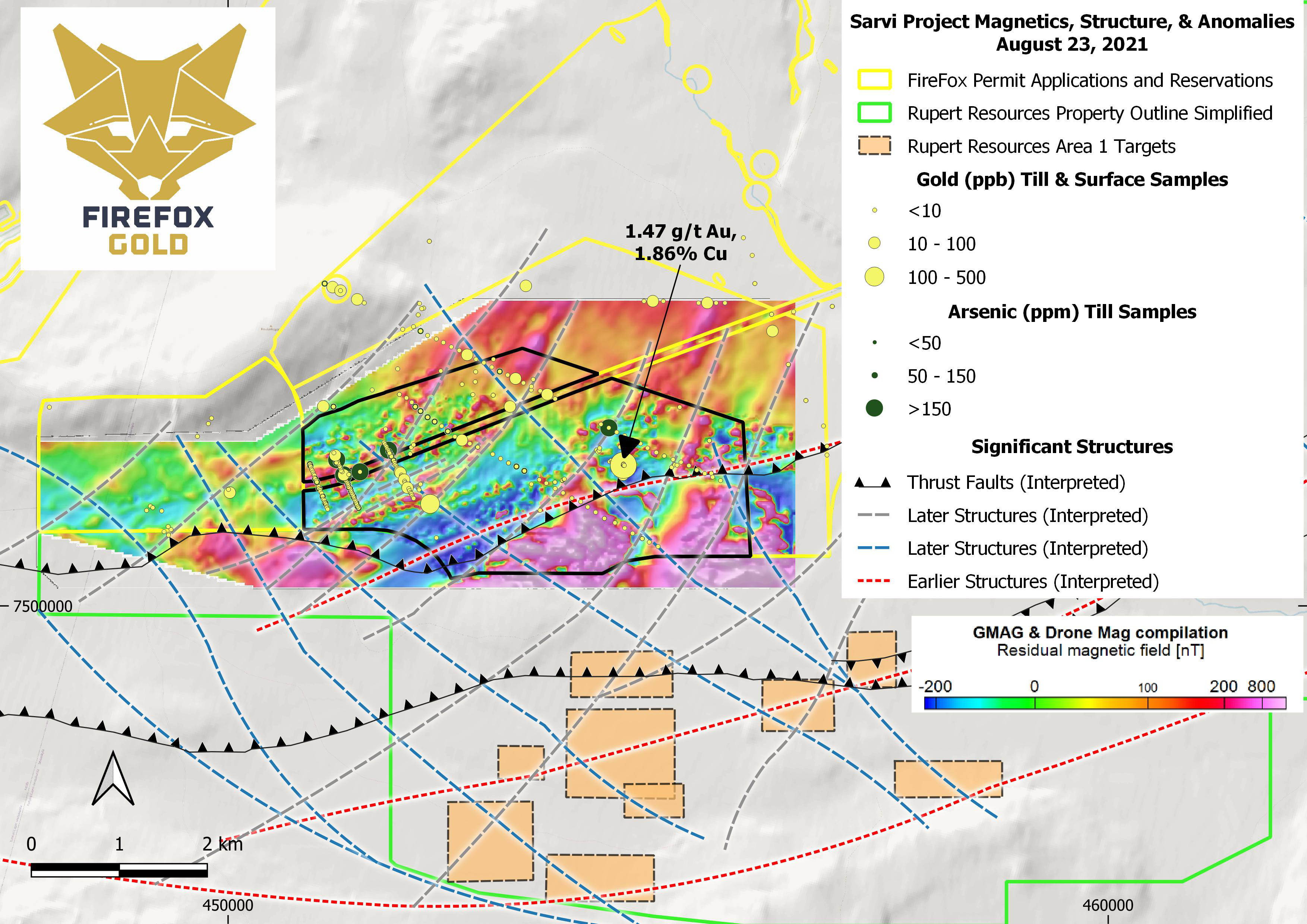 On behalf of the Board of Directors,
“Carl Löfberg”
Chief Executive Officer

The information herein contains forward looking statements that are subject to a number of known and unknown risks, uncertainties and other factors that may cause actual results to differ materially from those anticipated in our forward-looking statements. Factors that could cause such differences include: changes in world commodity markets, equity markets, the extent of work stoppage and economic impacts that may result from the COVID 19 virus, costs and supply of materials relevant to the mining industry, change in government and changes to regulations affecting the mining industry.